I’m sure you have heard by now but California has now lost vaccine exemption laws.  In other words, if you don’t get your child vaccinated, you can’t bring them to day care or any public or private schooling.  You are vanished into the realms of home schooling and online charter schools.

Much of this policy was spear headed by the hysteria over the measles cases in Disney Land last year.  By hysteria, I mean fear and worry that much of our childhood diseases will be back to plague our kids and take their lives away.  But is that really the case?  Is it possible to take the fear and worry out of emotional decisions?

So far, the answer is no.  Each side just tends to shout louder.  If we could take the shouting away and focus on why we are afraid and worried, then I think we would have better communication from both sides of the vaccine fence, or should I say wall.  Both sides actually want the same thing.

Both sides want our kids to be as healthy as humanly possible.  The disagreement comes in how we achieve those results.  The pro-vaccine choice crowd has to shout louder since they don’t have the budget of all the organizations that want anti-choice vaccine.

As soon as you induce fear or worry, the logical, communication parts of your brain get bypassed in favor for the emotional limbic system.  It’s a fight or flight reaction.  You’re never going to look into the mouth of a Black bear and analyze his teeth.  “Maybe it’s an old bear and the teeth have all fallen out”….said no one ever that has survived a bear attack.

Hysteria is easy when talking about health outcomes because there is that fear of the unknown. 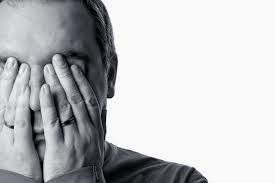 How do you take the fear out of a situation?  You have to take the emotion out of it.  This is easier said than done but very doable and possible.  Why fear is at an all time high is because our society has shifted towards a post-modern type population.  There are just as many millennials as there are Baby Boomers.

A modern population is where information is valued over experience.  If I tell you not to touch the stove becasue you will burn your hand, you will most likely listen and obey.

I’m an analytical guy and I don’t like either scenario.  I get asked all the time how I am so confident in major decisions in my life?  It’s because I crunch numbers.  I mix the information to create my own first hand experience.

Fear and uncertainty are relieved by authority.  Authority is training. -Ryan Holiday

If I am getting anxious about a decision or circumstance, I’ll start with worse case scenario and look at the actual odds of that happening.  In other words, I train.

[bctt tweet=”Fear and uncertainty are relieved by authority. Authority is training. -Ryan Holiday”]

It’s estimated that there is 42,000 deaths each year from car accidents.  If our population is 315 million, that leaves you with a 0.013% chance of dying by car accident.  In other words, you have a 99.987% chance of living through your car ride.  I’ll take those odds in Vegas any day.  You take those odds every time you buckle your toddler into your back seat.

Another scenario happened with my first child.  My wife had tested positive for Group B strep and they wanted to do prophylactic antibiotics during pregnancy and hold our baby for 2 days in the hospital for observation while dosing antibiotics, ‘just in case.’  Our provider kept saying that if we don’t do the antibiotics, there would be a 1 in 200 chance of death of our baby.  From an emotional standpoint, that sounds serious.

To my favor, my emotionless persona comes in handy.

I bet we all know 200 people and to have 1 person die in that circle would hit close to home.  But when you look at the odds of it, it seems laughable.  They make a big stink at a chance of occurrence equal to 0.5%.  In other words, my child has a 99.5% chance of being perfectly fine.  Again, I’ll take those odds any day in any market.

One of the most emotional issues that creates fear is infectious disease.  My generation (Gen X) is told we are ignorant because we didn’t see the devastation of polio and that by not vaccinating, we’re putting our kids in amazing danger of death and paralysis.  Worse yet, if we don’t vaccinate our kids, we are putting other kids at risk, even the vaccinated ones.

Below is a screenshot from the CDC describing polio. Let’s analyze the numbers to dissipate fear. 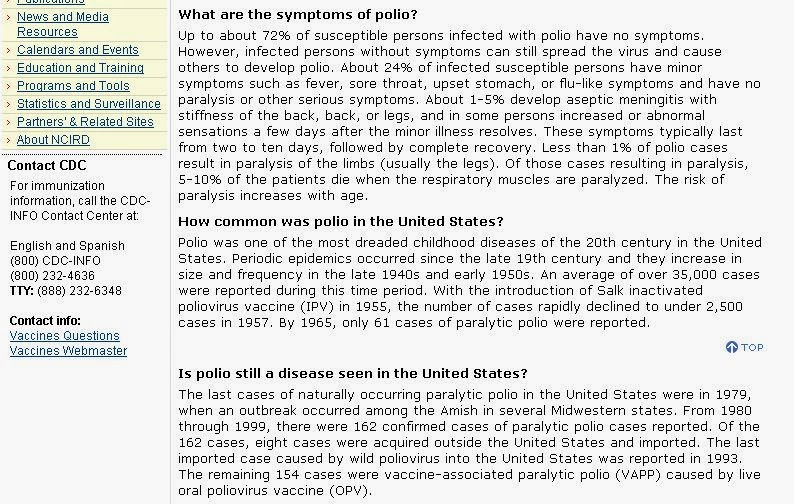 Then it states that 24% have minor symptoms that look like the flu.  If you have a fever, sore throat, upset stomach and NO paralysis, do you automatically think you have polio?  Not a chance. Again, what are the chances of your doctor testing you for polio with that list of symptoms?

96% of the people that supposedly have polio have symptoms (or don’t have symptoms) that look nothing like scary polio.  Could the 35,000 number be inflated?  Could 33,600 of those 35,000 cases be something other than polio?  I won’t speculate, I’ll keep using the published numbers.

1-5% develop aseptic meningitis.  Meningitis sucks.  It’s painful and you feel like you wish you were dead.  But it also states these people’s symptoms resolve.

The scary thing is the ‘Less Than 1%.‘  These are the cases that experience paralysis.  They live but their lives are greatly affected physically and emotionally.  Of the 1% of the 35,000 cases, 5-10% OF the 1%, will die. These look like scary numbers because people just read 5-10% of people will die.  You have to read carefully.

Let’s break the numbers down a bit and use all these numbers that are PRE-VACCINE to look at actual risk of getting polio and risk of choosing to not vaccinate.

I don’t disregard the pain and suffering of those individuals or families that experienced paralysis or death from polio.  I wish I could give them back their lives.  What kills me just as much is that a marketing campaign and governmental policy was created around the fear and worry of those individual’s experiences.

I’m thankful for medicine in emergency situations.  Vaccines are not an emergency situation.  It’s not like they work immediately, hence the need for booster shots.  As a parent, you can take time to analyze the risks vs. benefits of the intervention and it probably won’t cost you anything.

I’ve never made a decision that I was proud of when fear or worry was involved.  Take time, analyze, and be comfortable with your decision.  The outcomes has to be ‘health.’  When we turn that into ‘most vaccinated,’ we get different results.

West Virginia and Mississippi have the strictest vaccine laws.  Mississippi has the highest vaccine rate in the US.  They also have the highest infant mortality rate, almost 100% higher than California.  West Virginia’s infant mortality rate is 52% higher than California’s.  Do we have to wait for California’s rates to match those other states with the strictest vaccine laws to change our health outcomes?  I hope not.

Previous
Before You Detox

Up next
Vagus Baby